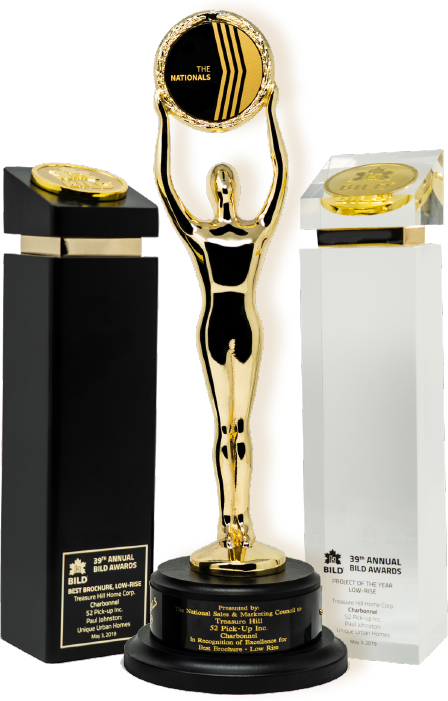 We are an award-winning home builder.

Including 2-Time Winner of Project of the Year

This year, Treasure Hill furthered their commitment to building new homes at the highest standard. As a result of this dedication, Treasure Hill was the proud recipient of 8 awards, including two prestigious wins for Project of the Year – Low Rise at both a local and provincial level.

Looking back at a successful year - over 500 homes sold

This community sold over 100 homes in under 3 weeks, offering luxury singles on large lots in a prestigious Aurora neighbourhood.

In less than 3 weeks, this urban townhome community, located at Canyon Hill Avenue and Yonge Street, sold out of over 125 units.

Offering both bungalows and 2-storey singles, this popular community’s first phase sold out this year.

Not only did Georgina Heights sell out their first phase, but the second Phase also sold out shortly after launch. Keswick’s Best Selling Community has Model Homes coming soon!

Register for Next Release

Treasure Hill is known for their urban town-home designs, and Trendi proved to be another hit by selling out of both Phase 1 and 2.

Register for the Grand Finale at Trendi

This luxurious community of single-detached homes sold out of the first phase within weeks of launch and have only a few remaining in Phase 2.

After becoming the two-time recipient of Project of the Year - Low Rise, there are only a few townhomes remaining at Charbonnel.

After becoming the two-time recipient of Project of the Year – Low Rise, there are only a few townhomes remaining at Charbonnel.

After a truly successful year, Treasure Hill is looking forward to what’s to come in 2020. Make sure to register to stay up to date with new communities and releases across the GTA in many locations.